It Appears CX5 is a Success

CX5, a sculptable 3D printer filament, appears to have surpassed their launch goals and will become a product.

We wrote on CX5 some months ago, describing this unusual 3D printing filament that has the peculiar property of sculptability. That is, after you print the object, you can shape it with standard sculpting techniques.

The material prints as any other filament, although it offers a low printing temperature requirement and also sticks very well to a wide variety of unheated print surfaces.

CX5 prints are solid, but if you apply a mild heat to them, they are able to be sculpted using standard hand tools. When solid, it can be sanded, drilled and finished in the usual manner.

This is, in a round about way, a method to dramatically increase the resolution of your existing filament-based desktop 3D printer.

This concept appears to have caught on with 3D printer operators, who have now fully funded the completed launch campaign, with well over USD$80,000 in orders. That might not seem like a big number compared to, say, a million dollars for a 3D printer, but in this case the product has a far lower unit cost. Over 500 backers spent an average of USD$150 per order, meaning they ordered multiple spools of CX5!

As of now the company’s Kickstarter has closed, but it appears Adam Beane Industries will be selling spools of CX5 from their online store.

Via Kickstarter and Adam Beane 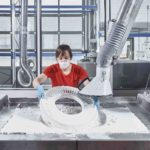