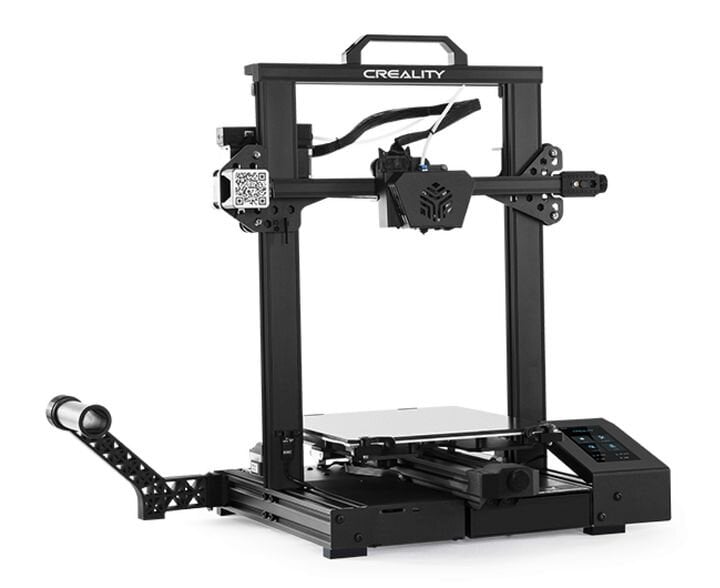 The Shenzhen-based company has been producing many different 3D printers since 2014 and has released several very popular models. Today they list no fewer than 22 different DIY 3D printers on their product page. Incredibly, their massive 30,000sm factory is capable of delivering “over 800,000” units per year. While I’m not sure they are at that level yet, it shows their capacity to make 3D printers at large-scale volumes.

One of the machines that will soon come off their production lines is the new CR-6 SE. This is a desktop unit that at first glance might have the same design we’ve seen from many other inexpensive 3D printers. However, upon closer inspection it seems that Creality has included several very interesting features, some of which I haven’t seen on similar units previously.

First, let’s look at the basic specifications of the CR-6 SE:

Those are features you’d expect to find on any competent desktop 3D printer these days. But on the Creality CR-6 SE there are a number of unusual features. Some of them you may have seen on other devices, but there are several more advanced you may not have seen before:

There’s more, and these are features I haven’t seen often or at all on other 3D printers, and certainly not all on one machine.

“Leveling Free” automatic calibration: Creality has installed a photoelectric sensor on the hot end to allow for a completely automated leveling experience. The CR-6 SE performs tests at multiple points on the build plate with no intervention required by the operator.

Modular hot end for easy maintenance: I’m not quite sure how this works and would like to try this myself, but Creality’s new hot end design is easily disassembled to quickly replace any of the heater block, heat sink, tube or nozzle very easily. If you’ve ever had to replace any of those components, you know this is a very useful feature.

Built in belt tensioner knob: Tightening motion system belts is inevitable for almost all 3D printers, and usually it’s difficult to do. But with these adjustment knobs it’s a trivial task. This should be a mandatory feature for all 3D printers!

Tool storage drawer: With the wider base for stability, Creality is using the added space to allow for a tool drawer. This is an incredibly good idea because every 3D printer operator has several tools lying around their 3D printer. The drawer provides a place to put — and easily find — them.

Portability: Creality correctly believes this 3D printer will be moved around, and they’ve included two features to help this happen. First, there is a carrying handle right on the top. Secondly, the filament holder, a component that usually sticks out awkwardly during printer movement, can be folded up. This prevents it from being broken off accidentally when moving.

Silicone hot bed cable protector: A frequent failure point in many 3D printers is the heated print surface cable, which repeatedly flexes as the plate moves back and forth. This feature might make the cable last a lot longer.

Built-in print plate holders: This is another very required feature, which is quite different from other machines that have loose metal clips holding down the plate. Those clips usually go flying away if you move the plate, but that will never happen on the Creality CR-6 SE, which has these useful built-in plate holders.

The Creality CR-6 SE appears to be a very interesting desktop 3D printer with all these great features. They’ve even taken the time to tuck in loose cables that so many other 3D printer manufacturers do not do. The CR-6 SE even looks different from the standard 3D printer design we’ve seen so often.

Can you get one of these devices now? Yes, you can.

For the very first time, Creality is launching the CR-6 SE on Kickstarter next week. The company has never used crowdfunding previously, but their notoriety should ensure success. I think the CR-6 SE could be a very popular item. While their Kickstarter is not live yet, you can sign up for notification when it does open up right here. If you do, you might be able to order a CR-6 SE at the low early-bird price.