Design of the Week: Icarus Had a Sister This week’s selection is the stunning “Icarus Had a Sister” by artists Masters & Munn, a.k.a. André Masters and his partner, CJ Munn. It’s the obvious selection, as this piece helped the pair win the “Rising Star” award at last week’s Global 3D Print Awards at the 2013 3D Printshow. (Note the actual award trophy sitting astride the bench).
The work is not entirely 3D printed; it’s a hybrid involving steel, quartz, copper, iron, slate, resin and of course, 30 micron layers of 3D printed Objet VeroClear material.
Masters & Munn say:

A hybrid of traditional sculptural techniques and state-of-the-art digital modeling and 3D printing, she has been built with the aim of inspiring other traditional artists to adapt and embrace new technology in their work, rather than to fear it; to create objects of beauty and awe that until now were impossible to build in the real world, and to continue to learn and develop, remaining as fluid as the constantly changing world in which we live. The work is quite large, being life size. It’s composed of two pieces, the lower of which is the pair of feet shown here in explicit detail (click for larger view). Not all of this work was 3D printed; it’s a hybrid of traditional and advanced making technologies. The 3D printed part is the very numerous wing feathers, which are coated with a beautiful copper veneer patina. Interestingly, the unique “nicks” in the feathers were not 3D modeled; they were simply added manually after the 3D print.
The body (and detached feet) are made from a sparkly-quartz “life cast” of freelance model Louise Banks – taken nine years previous. Finally, the base is a stunning chunk of slate exhibiting multiple colors.
But what does the work signify? According to Masters:

It’s a minimalist form showing both the fragility of the female form – but also the strength for a first flight. In a way, this symbolizes 3D printing today; It’s on the precipice, ready to leap into the future. 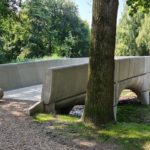 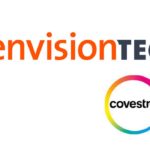 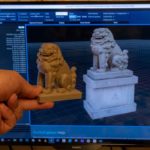 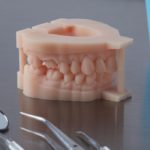