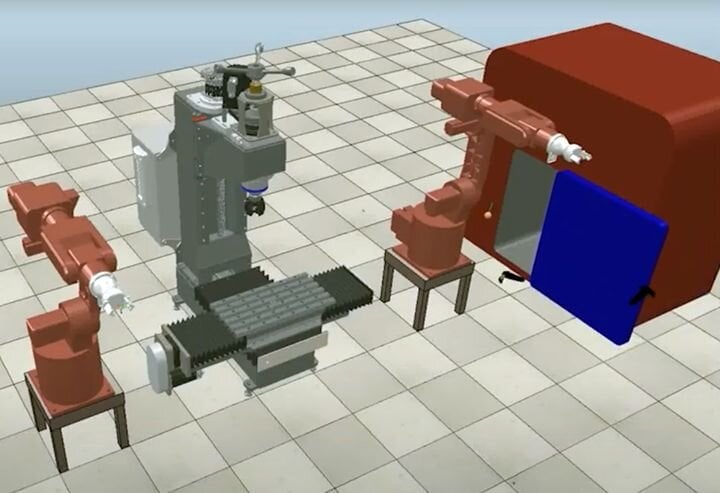 I had a chat with the folks from Haute Fabrication, who have a very interesting take on automating 3D printing operations.

The Iowa-based company ostensibly produces a metal 3D printing system, and they do. It’s quite an interesting system using their patented hybrid direct laser sintering (HDLS) process. The device monitors quality layer-by-layer as the print proceeds. This allows Haute Fabrication to detect cracks or other misprints in real time as their system performs visual confirmations at each layer. They’re even planning to include ultrasonic depth readings in the future, as the system is designed in a modular fashion.

But what really caught my eye was their virtual reality training system.

They correctly realize that the bottleneck in metal 3D printing production is not the printer itself, but in fact all the other processes that must take place in the workflow. While tweaking the speed of a printer to be a bit faster might be something other companies pursue, those actions really don’t amount to much in the entire production chain.

The heavy part of the work is outside the 3D printer where prints must be separated from the build plate, cooled, heat treated, CNC milled, polished and sorted. Haute Fabrication even includes atomization in their full process. These tend to be performed manually in most metal 3D printing shops, and that takes a lot of labor. Sometimes it’s highly skilled labor at high rates of pay.

Thus Haute Fabrication is seeking a way to short circuit those expenses and at the same time increase efficiency, speed and reliability.

Their approach is to use robotics to move prints along the several workstations required to complete the full metal production workflow. This involves picking up a part, placing it on a machine and even starting operations on that machine.

This may sound straightforward, but it really isn’t because you have to program the robot to perform all those complex maneuvers. This can be quite time consuming.

In their VR system you can see a simulation of the factory floor, including the 3D printer, robot and other pieces of manufacturing equipment. Here’s the key part: you use standard VR input devices to control the robot arm! This is then recorded and eventually becomes the actual program for driving the robot in real life.

You can see a bit of this in action from their video:

Haute Fabrication explained that the movements deployed in this approach are far smoother and more natural than those you’d obtain from the rough coding that is normally done on robots.

There are a number of advantages to this approach:

Haute Fabrication says the VR system is still new, but is quite scalable. They say it can be split into multiple instances and they should be able to “assemble” an entire factory if necessary.

Haute Fabrication operates as a contract manufacturer, and this is where they will primarily deploy the new VR factory system. They will not be selling it as a product, as it requires skilled staff to operate it. However, they will deploy a version to clients so they can “see what they will get” when the system is in operation.

The company is a startup, with currently 4 staff and 14 consultants. Their goal is to be cash positive in the first year, basically through manufacturing contracts that don’t require lengthy regulatory certifications. Specifically they are pursuing waterjacket components for GPUs, CPUs, heat pumps, and the like, which are complex and don’t require lengthy certifications.

While they’ve slowed down a bit due to the virus pandemic, they are still in operation, and in fact intend to do some hiring in the very near future.

If you’re looking for a role in a high-tech 3D startup and have the necessary skills, you might want to give Haute Fabrication a call.