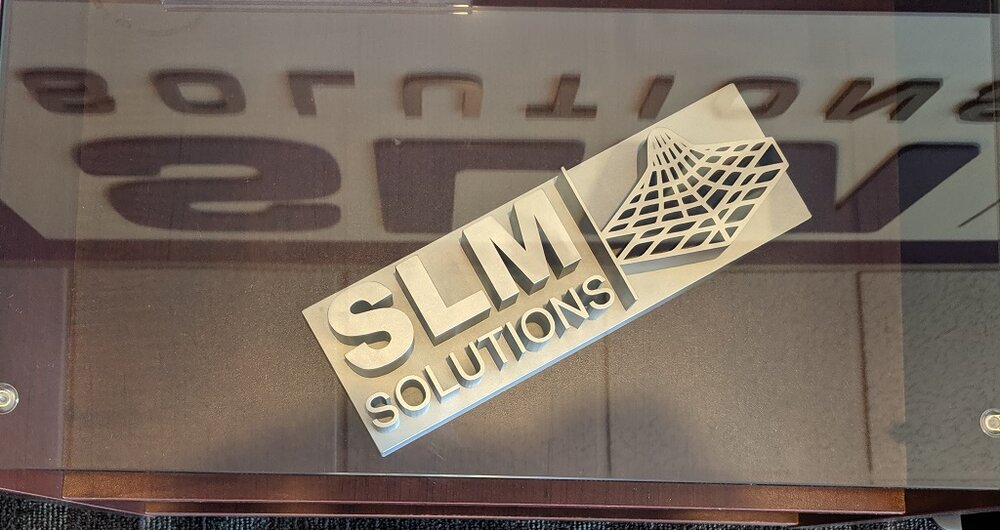 SLM Solutions is only looking ahead with internal restructuring and an upcoming machine release.

For the company that originated SLM 3D printing, history is obviously important. One of the most important things about history is, of course, learning from it. This Germany-based global operation is keen to learn the important lessons from some of its…let’s say bumpier bits of history. At SLM Solutions North America, that’s been all the more important as the North American — specifically US — market continues to be a focal point for strategic development.

I caught up recently with the team via virtual conferencing to touch base on the latest updates.

When I visited SLM Solutions North America last spring, the company was already much changed from the SLM I’d known previously (or, rather, that we didn’t really know). A new CEO, still fresh to SLM Solutions at the time, was bringing the winds of change to the company.

“I think the most important thing is the impact of changes under Meddah, our CEO who’s now been on for a year,” Winthrop Sheldon — himself recently promoted to Vice President of Sales & Marketing, Americas — told me in our rapid-fire interview.

“It’s almost hard to say briefly, but just read our announcements — end-of-year, orders, earnings: we’ve had a significantly better second half of the year. Of course coronavirus is causing huge challenges right now, but we feel our leadership is significantly stronger and our positioning is much stronger. We’ve doubled the sales team in the US, and feel the US is our prime market for growth. Again, coronavirus has delivered a shock that’s unbelievable, but the business is on a better path than it’s ever been with the leadership we have now; it’s not a minor change, it’s major.”

That major change is palpable not only in personnel, but in performance. As Sheldon mentioned, is seemingly turning the company around. He noted earlier lacks of success in selling machinery. Under the new structuring, though, “that’s changing dramatically.”

The recently doubled sales team should, then, be kept quite busy.

“We’re making a huge, dedicated effort to dominate,” Marketing Specialist Maria VanHaverbeck confirmed; “We know we have a great product.”

The already-on-the-market SLM 800 is quite a beast of a metal 3D printing system; too tall to fit in the Michigan facility I visited last year, the industrial system has been selling nicely this side of the Atlantic, with several sold last year and set for delivery in 2020.

At Formnext 2019, SLM also tipped its hand to hint at a new, still-top-secret machine still in beta. They displayed the build plate at the show, and are working with key customers on the development. VanHaverbeck called the upcoming system the “crown jewel for future innovation for our customers.” 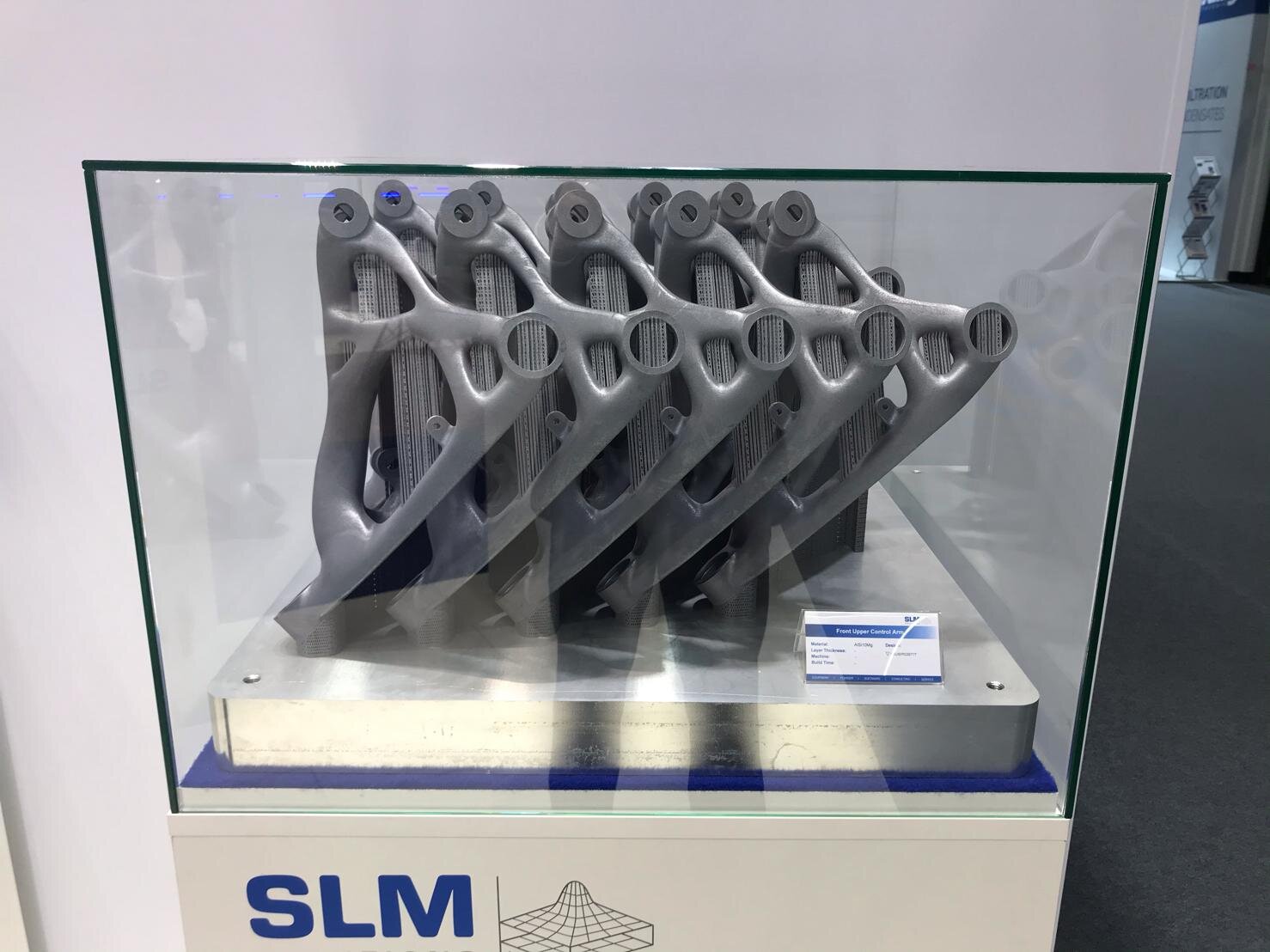 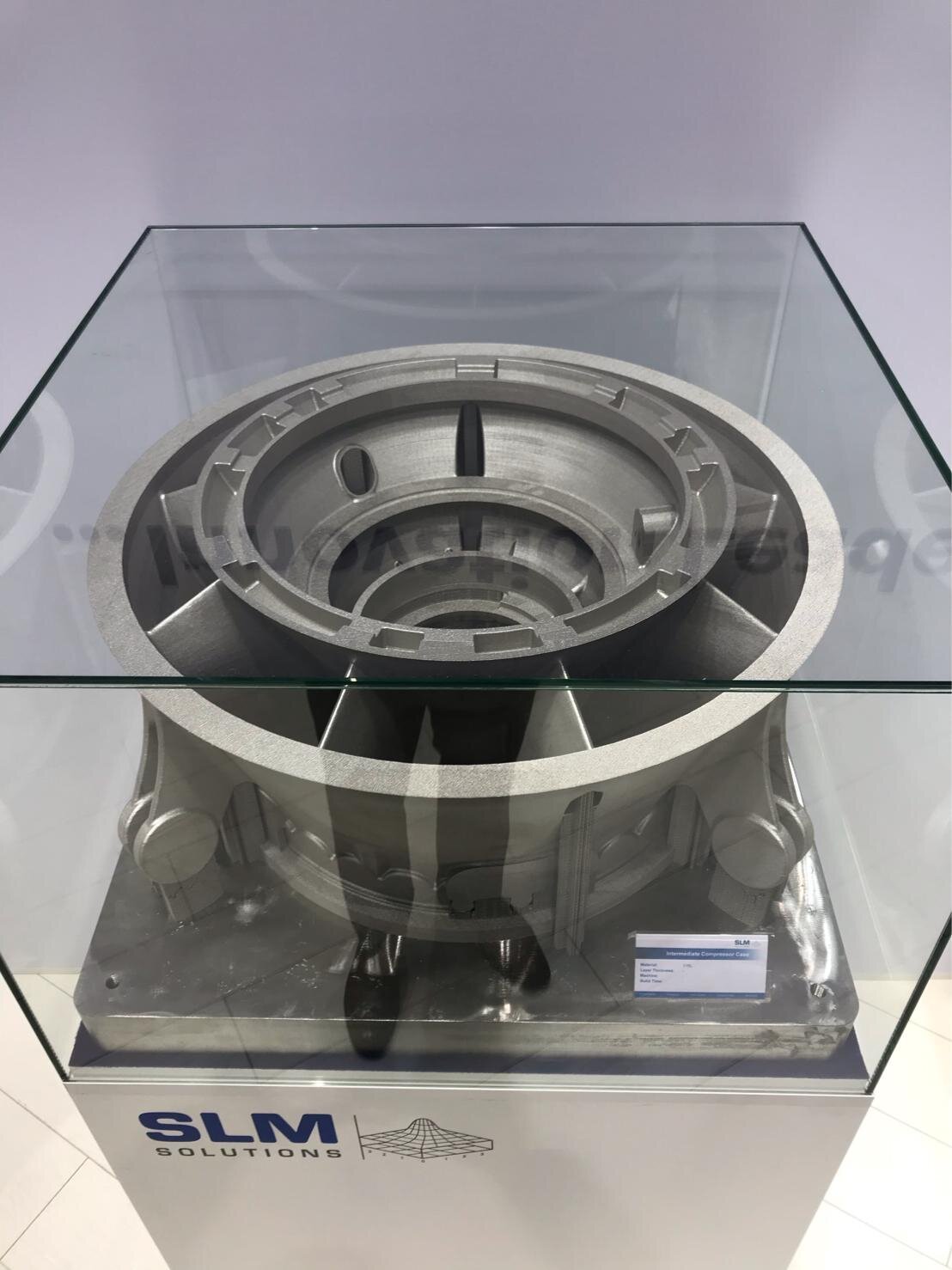 As he alluded to, though, plans for 2020 have been rather changed due to pandemic crisis conditions around the world. Initially, VanHaverbeck said, “2020 was really going to be our year to show up.” The marketing team was going to go big for this year, catching attendees at major events up in a huge double-decker booth and really highlighting the new offerings. They’ll still be showing up in a big way, but in lieu of a two-storey physical booth we’ll be hearing more from the team in the digital world.

They were able to share some of the plans about the system, though, as we spoke. It’s a multi-laser system that is large — but “not the biggest you’ll have heard of,” Sheldon said; “It hits a sweet spot in the industry…it offers a very compelling value proposition for the market.” The first system is already slated for a partner in the US, with whom SLM has already announced a relationship.

Multi-laser metal 3D printing with larger build areas aside, SLM Solutions is keen to highlight some of the other technical areas where they see their offerings shine.

“We’ve had the low-angle printing capability for a number of years now,” Sheldon said, noting that other companies have really been putting such a capability in the spotlight. “There’s no reason you can’t do that with SLM. We’ve shown examples of that kind of printing, 15 degrees without support, at Formnext.”

SLM Solutions is also “feeling confident” in its position in aerospace and automotive, working with high-profile companies like Boeing, Honeywell, Rolls Royce, BMW, and Divergent 3D.

Every market is different, of course, and Sheldon and VanHaverbeck homed in on SLM Solutions’ strategies specific to US operations. Naturally some of their focus is due to their US base and work in SLM Solutions North America — but some goes beyond that as the Germany-based company is overall turning attention to this continent.

“We’re not a small company, with 450 people, but we’re not as large as some of the other players,” Sheldon said.

“As I get a more global view of the business, it’s been eye-opening. In Europe, for example, we’re seen as a technology leader. Our focus as a company is on the US now, and working on that branding, that messaging. In Europe, Asia, and other geographies, we’re quite well received now.”

It’s easier to turn a speedboat than a barge, and attention to the course is critical for making such a large turn. It takes time to get set on a successful new course, even once the direction has been sorted. For SLM Solutions, the good news is that things are pointing now in the right direction; the leadership team is aligned on company mission and messaging, and steering all strategies in the same direction.

Catching up with SLM Solutions was helpful for a glimpse into what we can expect from the metal 3D printing mainstay. While there may not be a double-decker booth for a bit yet, it’s nice to hear from the company as they continue to work on being a visible leader in additive manufacturing.

[Edited to adjust/remove some anticipated dates/availability, as projections are subject to change.]