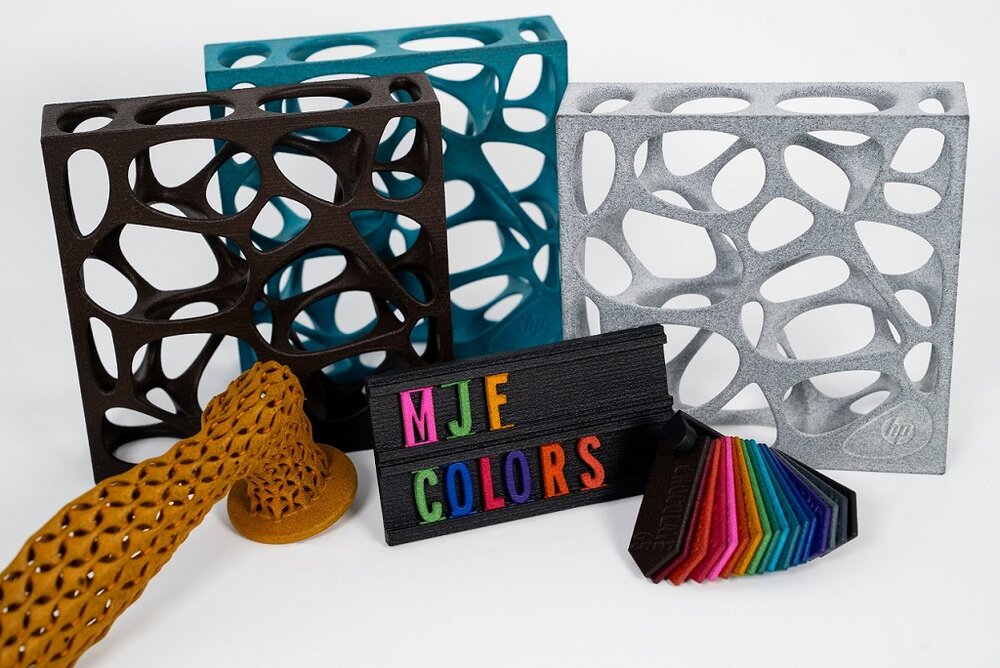 3D printed parts from PA12 on HP’s Multi Jet Fusion technology are strong, capable — and grey. But that’s about to change.

I recently spoke with the DyeMansion team about their latest news, and it’s colorful as always.

DyeMansion is well-known for its broadening array of post-processing capabilities for 3D printed objects. They can remove supports, smooth surfaces, and — most eye-catchingly — add color.

The color options are perhaps what DyeMansion has become best known for; after all, “dye” is in their name. The young team has been enhancing its dyeing capabilities since its founding, and can offer quite a range of colors across the RAL and Pantone spectra, including some interesting neons.

“You probably remember, we started at the beginning of DyeMansion five years ago with 13 standard colors,” Head of Global Marketing and Corporate Communications Pia Harlaß told me when we spoke recently. “We’ve created more, like those we introduced at Formnext three years ago. It was a huge step for us to enlarge our color range. Then we started doing more, with color matching where we were specially creating colors to match skin tones, and do customized colors.”

With each step forward in their color journey, the DyeMansion team advanced not only their technological capabilities to create and match colors — consistently, which is key to actual color matching and industrial quality — they also came to learn more about what the market needs and wants from color. 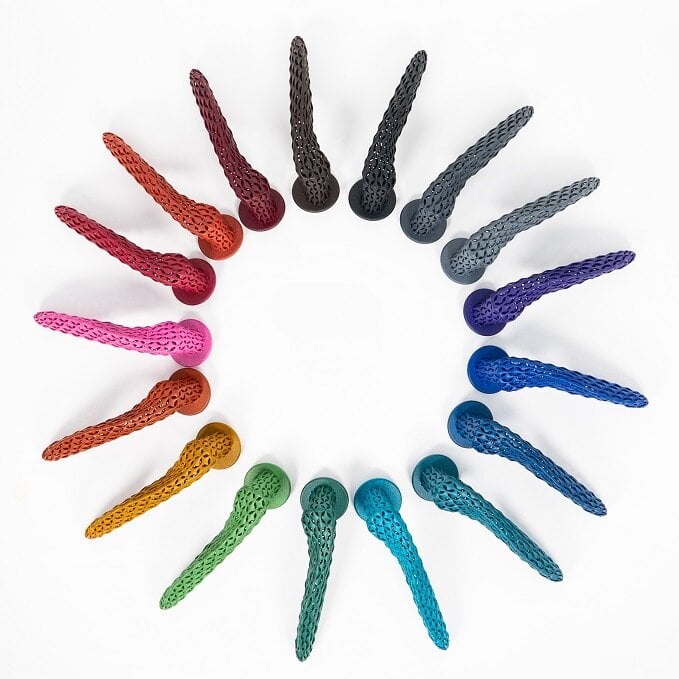 As they continued their work in coloring prints from industrial 3D printing systems, they became familiar with a good amount of technologies.

Some technologies and materials are obviously easier to color than others. White SLS prints, for example, are a nice blank canvas for dyeing — but when the canvas isn’t so blank, it gets a bit trickier to achieve vibrant coloring.

“What we recognized with the rise of MJF technology is that there is a big demand for these grey MJF parts to not be grey anymore,” Harlaß explained.

Parts coming off HP’s Jet Fusion systems using MJF technology are well known for a number of qualities, but ease of coloring hasn’t traditionally been among these. 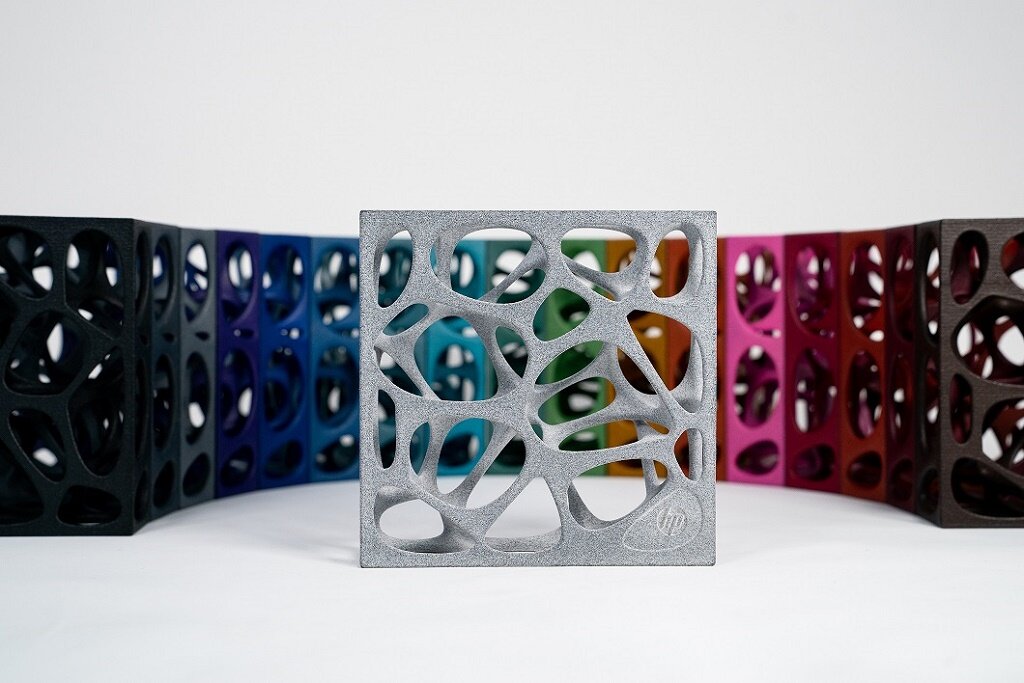 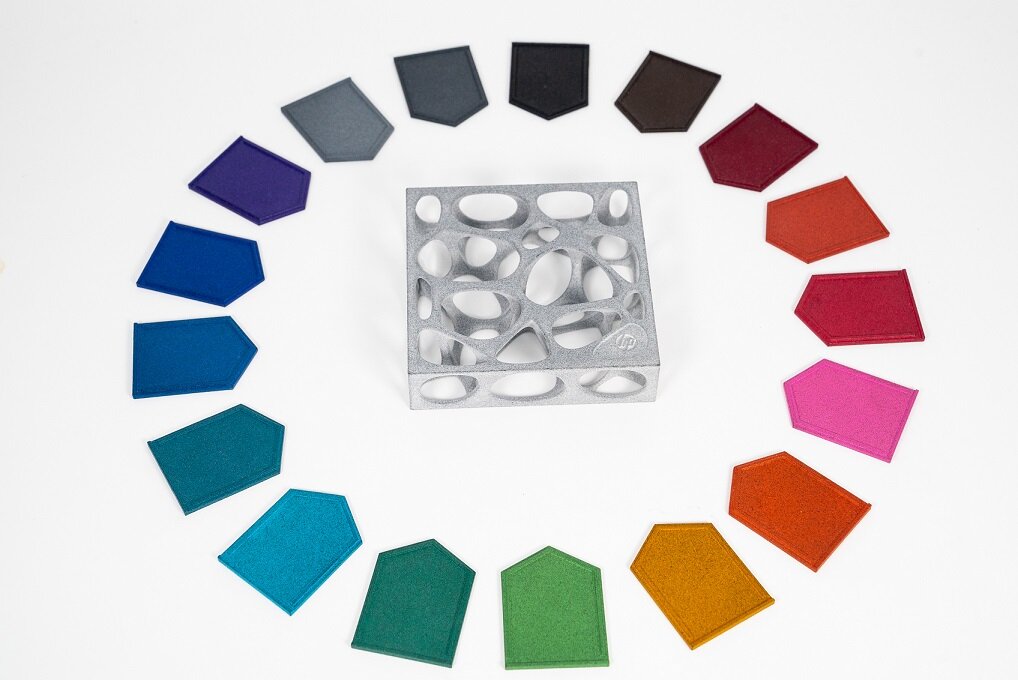 “Our team worked hard to find recipes which make those grey parts more vibrant,” Harlaß continued. “We are communicating now that we have done this. You really get a nice pink, a nice blue, a nice green — not just a dark shade of it. We really hope to open new options to the consumer and medical industries. Grey colors are pretty boring in our opinion!”

It’s not just their opinion — and it’s not just about being boring. While grey parts are absolutely functional, they’re not necessarily demonstrative of everything a finished part needs to be. Adding vibrant color capabilities is a nice step forward for fuller-service MJF parts to fit more end-user needs. It’s been relatively easy to dye the colors darker grey or into a variety of blacks, as well as the deep shades of colors Harlaß mentioned, but opening up a new color palette opens up new options for more target markets.

Developed specifically for grey PA12 parts made on Jet Fusion 4200/5200 Series 3D printers, DyeMansion’s new capabilities initially encompass 17 colors, from rich blues to strong reds, from cheery yellow to refreshing turquoise and pink. The extension of the DeepDye Coloring process will likely appeal to those in medical, consumer goods, and automotive sectors.

We can see from Formnexts past that the team has been working with MJF prints for some time, such as this shot I snapped in 2018 that includes a medical part made using MJF technology:

To fit the needs specific to these grey PA12 parts, DyeMansion had to go back to the lab to create a wholly new recipe.

Coloration the way DyeMansion does it is a different game than previously familiar batch dyeing, as all results through their work are both consistent and precise. Highlighting the capability, the DyeMansion team notes in the release discussing the new MJF capability:

“During the DyeMansion DeepDye Coloring process, the dyes react with the base material in a water bath under pressure and heat – in contrast to spray painting. The dyes penetrate up to 200 μm into the open pores of the parts. Parameters such as the color of the base material or the surface treatment of the part are important factors influencing the final color. As with all DyeMansion colors, the new color line was developed with surface treatment in mind. The selected process here is mechanical PolyShot Surfacing (PSS) with the DyeMansion Powershot S. The automated, mechanical blasting process achieves a homogenization of the surface and is perfectly suited for processing hard plastics. Other surface processes such as the chemical VaporFuse Surfacing (VFS) influence the coloring result and can also be tested for the new colors in cooperation with DyeMansion directly.” 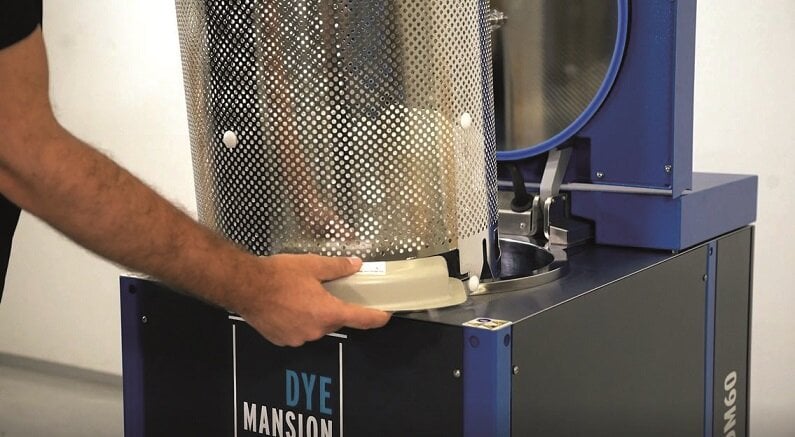 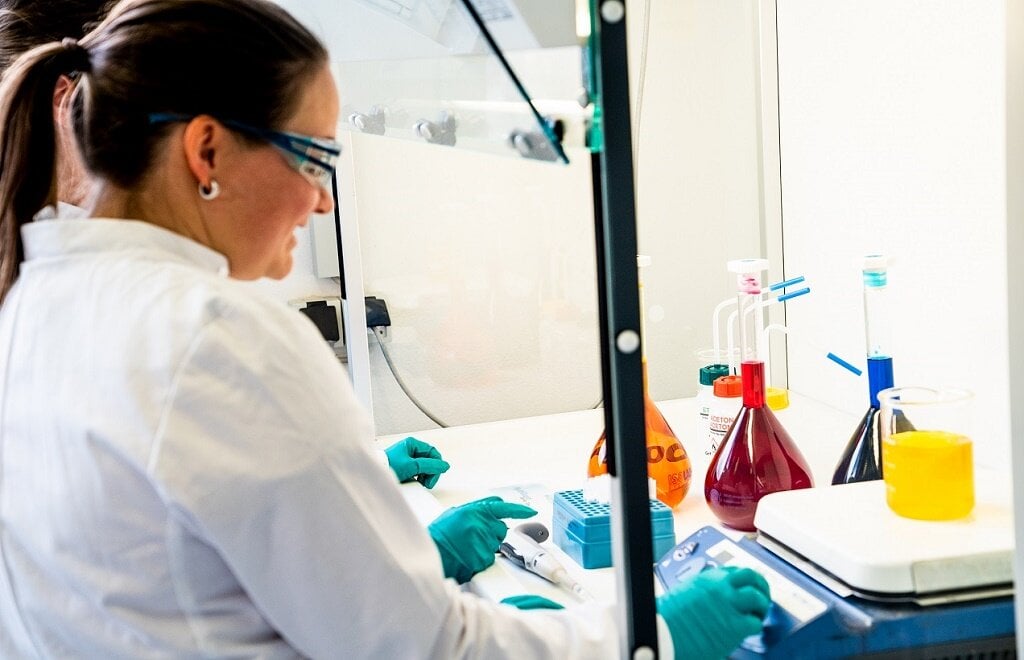 Notably, these new capabilities will change very little from DyeMansion customers’ perspective; Co-Founder & CTO Philipp Kramer notes, “The handling remains easy for our customers, because no DM60 hardware or software adjustments are necessary to use the new colors.”

The commercial launch is slated for this July, though a beta is open now for those users who already have an HP Jet Fusion 4200 or 5200 system, DyeMansion Powershot S, and DyeMansion DM60. Starting in June, “large quantities” of color samples can be ordered, and once July comes, full commercial availability begins through both DM60 color cartridge orders and On-Demand Finishing Service updates.

They’ll also be hosting webinars beginning next week to dig further into the new offering, complete with live Q&A with R&D expert Constanza Oszwald, who developed the new color offering.

DyeMansion is based in Germany, but has been expanding both its offerings and its team globally. The company now has a team of six based in the US, including service technicians, application consultant, and sales. They are all moved into the new facility in Austin, Texas, and hope to begin offering On-Demand Finishing in the US by June.

“Until we had that, a service technician from Munich had to fly over to fix something, which is not really the best way,” Harlaß told me of the expansion to the US. Of the additional capabilities, she added, “Customers will finally have the chance for more benchmarks to try our technology based in the States. They can visit our facility for light benchmarking, have some chats with the team, and help us get even more started in the States.”

Another update from the company comes in its new Powerfuse S system.

The team would have shown that machine at RAPID + TCT, and had unveiled it for the first time at this past Formnext. The system is the company’s second surfacing option. A bit on the Powerfuse S:

DyeMansion already has its first customer in the US, based in Minnesota and “looking very much into medical with our technology,” Harlaß noted.