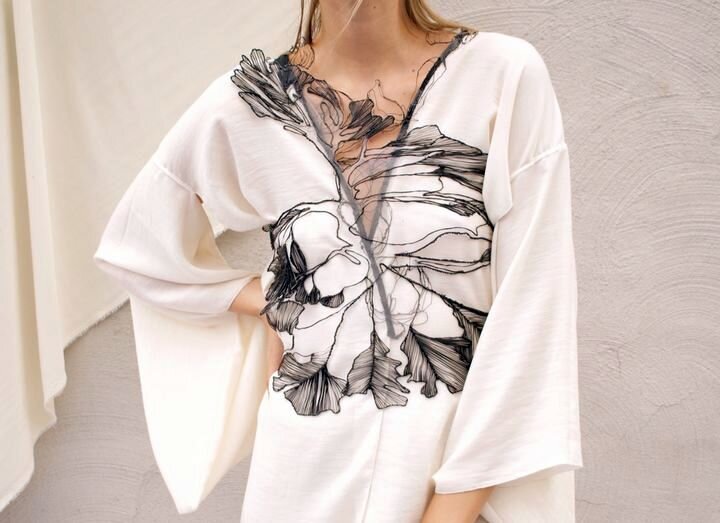 This week’s selection is the Artemis Top by designer Stéphanie Santos.

Santos is a Luxembourg-based artist who creates fashion through the use of a 3D pen. 3D pens are essentially a handheld extruder and hot end, and the motion system is simply a hand and arm. 3D pens are not exactly a 3D printers, but they do have many similar elements.

And they can certainly produce amazing works of art, when in the hands of a capable designer. Her biography explains her artistic drive:

“Studied different areas of art and design in Luxembourg and North of France. Truly admires the beauties in nature, especially most fond of the flora and its aesthetics. She wants to use modern and fundamental techniques into her work to show her interpretation of nature and art into unique garments. One of her specializing areas around Fashion/textile technology she studied at the TextileLab in Amsterdam. Where she was amazed of all the new possibilities for innovation in garment and textile design and production. As a curious and enthusiastic human being, she explores the new ways and works with her new skills in FashionTech.”

The Artemis Top is a very unusual fashion item, described by Santos as:

Other than factory-produced items such as shoes, wearable 3D prints are usually limited to very small items, such as jewelry, buttons or other minor adornments. Santos has gone far out of the mainstream of 3D printed fashion here in producing an entire corset — an item that covers the torso.

Perhaps “cover” might be a bit strong in describing this sparse design, but nevertheless it’s a highly unusual design that no doubt some buyers would find extremely interesting.

Santos produced the Artemis Top using a 3D pen, and while she does not say how long it takes to produce an Artemis Top, it must be many hours. Building large pieces with 3D pens is extraordinarily difficult, and particularly so for an object that must wrap around a person.

Santos has several other similar designs on her online store, including a belt bag also made with her 3D pen.

Artists of old created works entirely manually, but here Santos is bridging the gap between that world and the new one of automated making with her innovative use of a 3D pen.